To share your memory on the wall of Bruce Arthur Rucks, sign in using one of the following options:

Provide comfort for the family of Bruce Arthur Rucks with a meaningful gesture of sympathy.

Bruce was born May 26, 1929 in Amarillo, Texas, the son of Walter A. and Ethel (Burdick) Rucks. He graduated from Proviso Township High School in 1947.

Bruce met his wife of 66 years, Beverly Hedwig Frega, in high school and they were later married on November 24, 1949, in Maywood, Illinois. Bruce and Beverly lived in unincorporated Schaumburg Township since 1957 and raised their family there.

Bruce began his lifetime career in 1949 as a lineman at Public Service Company of Northern Illinois. During his tenure, that company merged with Commonwealth Edison. After 1970, Bruce was a manager in the Elgin division until his retirement in 1992.

Bruce loved being outdoors. He enjoyed hunting pheasants in rural Cook County and in South Dakota. Another pastime was fishing for bass and bluegill on Long Lake, Wisconsin, and for walleye in Canada. When he and Beverly wintered in Sun Lakes, Arizona, he spent time helping physically challenged children learn how to fish.

He was very proud of being the Fond du Lac, Wisconsin, marble champion as a kid in the eighth grade. When his two oldest boys were kids, he was in the Maywood Men’s softball league. He hit a softball over the church for a home run while significant bets were being placed.

They traveled to Hawaii, Morocco, Spain, Alaska, China, and cruised through the Panama Canal. They especially enjoyed seeing the polar bears in Churchill, Manitoba, Canada.

There were many other hobbies that he enjoyed: woodworking, electrical wiring, bird watching, gardening in Elk Grove Village, and planting and nurturing his fruit trees in Arizona. He attended his children’s and grandchildren’s sports events. He wouldn’t miss a Thursday breakfast in Elgin with his ComEd retired buddies.

A private family memorial service will be held to honor both Bruce and Beverly Rucks. Burial will be at Mount Emblem Cemetery, Elmhurst, Illinois.

Condolences may be sent to the family at Countryside Funeral Home & Crematory at www.countrysidefuneralhomes.com.

We encourage you to share your most beloved memories of Bruce Arthur Rucks here, so that the family and other loved ones can always see it. You can upload cherished photographs, or share your favorite stories, and can even comment on those shared by others.

Posted Dec 18, 2019 at 01:52pm
Bruce and Bev were a great couple and wonderful friends to us in Sun Lakes. Many good memories with them in the Bocce Club!
Terry and Rich Sporleder
Comment Share
Share via:
SS

Posted Dec 18, 2019 at 09:31am
May you memories of your dad and grandpa bring you comfort and peace. With sympathy,
Gary & Sandy Schwarz
Comment Share
Share via: 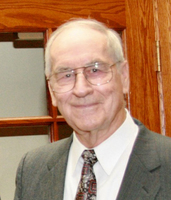