To share your memory on the wall of Edward Latondress, sign in using one of the following options:

Provide comfort for the family of Edward Latondress with a meaningful gesture of sympathy.

Ed was valedictorian and president of his class at Menasha High School. He went on to graduate with a degree in chemical engineering from the University of Wisconsin in Madison where he met his future wife and soulmate, Ginny Larson. They had been married for 64 years at the time of her death in 2010.

A WWII Navy veteran, Edward was the commanding officer of his ship, an escort ship operating in the Pacific theater. Upon returning, he and Ginny were married in Astoria, Oregon.

Ed began his career in the food industry (edible oils) starting with Anderson Clayton in Sherman, Texas, where he developed the first soft margarine, Chiffon, and contributed to the creation of the Seven Seas salad dressings. He later worked as plant manager for Swift Edible Oil company in Kankakee, Illinois, where they produced 7 million pounds of product per week for use in commercial products such as prepared foods. Later, as the Director of Manufacturing for Swift Edible Oil Company, he was in charge of the edible oil business as well as Peter Pan peanut butter and Soup Starter operations. He was a member of the American Oil Chemists Society for whom he wrote many papers (ex. Oil-Solids Separation in Edible Oil Processing) that are still being cited in AOCS research studies. At the end of his career he worked for Davy McKee Corporation where he did international consulting under President Jimmy Carter's good will initiative to assist countries in developing profitable industries. He was also a faculty member at Austin College in Sherman, Texas, where he taught calculus.

Ed, always very active in church activities, was a Sunday school teacher and board member. For a number of years he and Ginny chaired the Bake Shop at Mistletoe Mart at the First Methodist Church in Elgin. In addition to the obtaining donations for supplies and volunteer bakers, they scheduled and supervised baking sessions at the church. Ed was known not only for being the only male baker, but also for being the pie crust expert, rolling the crusts for all the volunteers. In addition to baking, Ed and Ginny enjoyed many activities together such as golf, photography, bridge, cribbage, gardening and travel. Ed was an avid reader and music enthusiast. He was known for his great sense of humor and laugh along with his innate ability for storytelling.

For information (630)289-7575 or www.countrysidefuneralhomes.com
Read Less

We encourage you to share your most beloved memories of Edward here, so that the family and other loved ones can always see it. You can upload cherished photographs, or share your favorite stories, and can even comment on those shared by others. 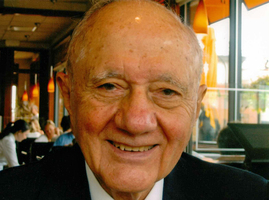