To share your memory on the wall of Jeffry Curtis, sign in using one of the following options:

Provide comfort for the family of Jeffry Curtis with a meaningful gesture of sympathy.

We encourage you to share your most beloved memories of Jeffry here, so that the family and other loved ones can always see it. You can upload cherished photographs, or share your favorite stories, and can even comment on those shared by others.

You left us exactly a month ago on Christmas Day. I know you loved your first Christmas in Heaven. Please keep watching over all of us as we remember you so fondly and rejoice that you are free from pain. Please especially watch over Carolyn, Noah, Josh and your whole family.

Posted Jan 03, 2020 at 05:31pm
Mr. and Mrs. Santa Claus came to my house every year for "Irish Breakfast" and they listened to all the children's requests and read them a Christmas Story.
Santa ( Jeff) was a wonderful man. He continues to be beloved by all. We have so many pictures of him, he is part of our shared memories.
It is so fitting that he passed away on on Christmas.

My condolences Mrs. Santa Claus and to your family.

He loved seeing your family every year..

Posted Dec 30, 2019 at 11:39am
So sorry for your loss Noah. Deb and I send our deepest sympathies to you and your family.
The Wilsons
Comment Share
Share via:

Posted Dec 29, 2019 at 07:11pm
Carolyn, we are so sorry to hear about Jeff's passing. You two were wonderful together as Mr Mad Mrs Claus and it was so much fun to get to see you both over the years and hear about your "adventures" as the First Family of Christmas. We are so sorry we missed his ceremony....we have been inundated with sickness here since the week before Christmas and are just bouncing back so didn't want to share our germs, which have been way too potent. We do want you to know we send our love to you and are so sorry for your loss. What happiness you were both able to put out into the world! Jeff will be missed.~Love, Bill and Lin
Comment Share
Share via:

Thanks for your love and thoughts.

Posted Dec 27, 2019 at 06:15pm
So sad, Jeffry WAS Santa. He was the real deal. Our twins once graced the cover of the Daily Herald sitting in his lap as tiny babies, they are now 11, and we have been going to see him every year. He will always be fondly remembered. we loved seeing you every year!! 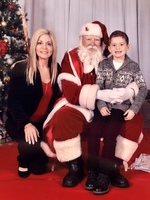 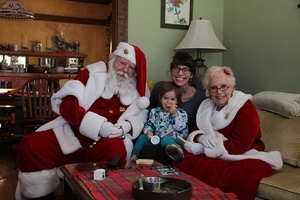