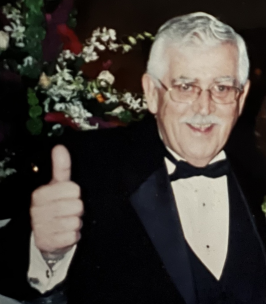 Michael P. O’Donnell was a loving husband, father, grandfather, uncle, and friend. He left this world on October 18, 2022, at the age of 92.

He grew up in Chicago, graduated from Holy Name High School where he played football, basketball, baseball, ran track, and played three instruments. He spent time on Arranmore, Ireland before being drafted into the Army, serving during the Korean War. He returned to Chicago where he met his lovely bride and moved to Streamwood where he raised his 6 children and lived for the next 52 years. During those 52 years he was active in the community where he was a coach, scout leader, and active in the church. Michael P. worked as a sales manager in the transportation and logistics field where he was awarded many top honors.

Everyone that knew Michael P. recalls his high moral character, how charismatic he was, and that he always had a positive and nice word to say to others. He will be remembered for his kind smile and jovial outlook, always leaving a conversation making a person’s day a little brighter.

In lieu flowers, the O’Donnell family requests donations in Michael P’s honor for the donation of a new art room and garden building at the secondary school (high school); Gairmscoil Mhic Diarmada on Arranmore Island on the land that was originally his family land, for students to enjoy.