To share your memory on the wall of Wayne Shuster, sign in using one of the following options:

Celebrating the life of Wayne Carl Shuster
His Nephew Buster said
“Uncle Wayne was the glue for the Shuster Family”
Besides keeping the records of the Hiram Alpheus of the Shuster family Wayne kept records of all the Shuster's Birthday’s, obituaries, greeting cards and many of the family photos.

“Chef” Wayne was what he was called by many as he had 43 years of his life invested as a Head Chef. He managed kitchens, hired employees, purchasing foods & supplies, creating menus and supervising employees.
A Letter from Dr. Harold M Kass had said when Wayne was entering into one of his new Chef jobs. “It was very nice to see Wayne Shuster performing so well in his new job. He appreciates the surroundings, and outstanding kitchen facilities. I would remiss if I did not say the meal was superb...it had the old “Wayne touch”.
Wayne retired at the age of 75 years old. He had a very long Cooking career
1955-1960 Blackstone Hotel, Chicago Il
Wayne had the Opportunity to cook for the President of the United States
1960-1965 Water Tower Inn, Chicago IL
1965-1968 Saddle and Cycle Club, Chicago IL
1968-1971 American Restaurant Association, Melrose Park, IL
1971-1975 Arlington Park Towers, Arlington Park, IL
1975-1979 North Riverside Golf Club, North Riverside, IL
1979-1981 Brookwood Country Club, Woodale, IL
1981-1984 Aurora Country Club, Aurora, IL
1984-1992 Park Ridge Country Club, Park Ridge, IL

Temporary job Shady Lane, Marengo, IL he worked with his daughter Kathy in the kitchen
Last 10 years of his career 1993-2003 total 10 years Wayne worked at the Peterson Meadows in Rockford, IL
March 1998 he was chosen Employee of the Month.
Wayne said in the Newsletter “I never expected being chosen Employee of the Month. It is something I was honored by. One day I just drove by Peterson Meadows when it was being built and walked in for an interview”
Wayne was born in Westmoreland Co. Pennsylvania
Reported to the United States Army on January 23rd ,1951 he received an honorable discharge on December 31st, 1952 during that time he served in Augsburg, Germany when on April 28th, 1952 Wayne was elected President of the Fellowship of Protestants. His Decorations, Medals, Badges & Campaign Ribbons received was AOM Germany
Most significant duty Assignment Co. K 102nd Infantry
Service Schools , Courses Successfully Completed EUCOM QM School for Cooking
On February 18th, 2002 Wayne received Certificate of Appreciation from the Foreign Wars of the United States
1947 –1951 Wayne’s Civilian employment was Farm Hand Dairy in Burt Silvia Export, PA
Education Greensburg High School in PA from
1944-1948

Wayne enjoyed traveling to Branson and Nashville to hear his favorite country western music. Wayne had a green thumb as every place he lived he got into the dirt and created a beautiful flowering landscape. Zinnias and Hollyhocks was his favorite.
When you plant your gardens keep the memory of Wayne by planting these seeds.
There was a paper written up for Wayne regarding his garden in the Greenview Estates in Belvidere was Dottie Jevne who had to get a look at Wayne’s gardening. She said “Our Chef Wayne is an avid gardener and is quite proud of his flowers”


Wayne enjoyed visiting with his family and going back to his childhood roots. Sept 22nd, 2000 in Delmont, PA he attended the 150th Anniversary Celebration from Salem Lutheran Church. To this day Wayne still received Newsletters from the Salem Lutheran Church.
September 13th, 2003 Wayne was able to attend the 50th Shuster Reunion in Pennsylvania
August 6th, 1960 Wayne received his Discharge Certificate from the United States Army Reserve

During his Army days he met up with one of his many Army buddies Lewis Lynch who had a sister named Edith May who Wayne married on June 30th, 1955 although they divorced around 1980 Wayne was always devoted to his wife Edith May and has requested to be buried alongside her. Married at the Honey creek Chapel in Trenton, MO Reverend McMillion performed the Ceremony. Tootie (Mary) was Edith May’s sister who is the last survived sibling from the Lynch side of the family. Wayne had so many fond memories in Missouri.
The Shuster Family- he is survived by his (3) Daughters Rosella, Betty and Kathy who is married to Patrick Rapp,
(2) Grandson Christopher Lee who is married to Carley and 2nd Grandson Carl Patrick
(2) Sisters Ella Mae Krizek (Shuster)and Zella Grzelak (Shuster)
(1) Brother Herbert Shuster
Wayne has many nieces and nephews
He was preceded in death by his Parents Mr & Mrs Joseph E Shuster Mother Maiden Maude Mae Deemer Deceased Siblings are Thomas, David Deemer, Joseph W, Ray E, Robert and William

“Grandparents have so many dreams for a grandson”
Christopher and Carl have memories of their Grandpa Wayne Christopher Remembers
At a young age your grandparents house was always an adventure. Finding old photos of your parents when they were kids. Looking for old toys and touching tons of things you shouldn’t be touching! My brother Carl and i did plenty of that at my grandpas house. Looking through his library for boxes of toys and not books. Going in the fridge eating his candies. Best part about Grandpas though was sitting at the kitchen table and watching him cook. He was a great chef not only in the kitchen but for the Army as well. My grandpas kitchen is where I slowly learned the love and art for cooking. Most of all my grandpa helped me find my passion for cooking. Anytime now I go to turn that stove on and cook a meal for my wife and family, I know I’ll have you by my side looking over me. Hopefully turning down my sauce burner in case I forget!! Lol! RIP in grandpa. Thank you for everything. Love Chris

Carl Remembers
Last night we heard the news that my grandpa Wayne Carl Shuster passed away last night. As a kid i would crave his ribs when we would eat at his mobile home. When he would watch me I would watch cartoons in his room and sneak into the kitchen to take an ice cream or two.... As I grew up he would attend my races in HS. Even the smallest of races I would see him at the finish line. He would always ask me how my job was doing and my car lol. I love you grandpa and I'll see you at the end of my race.

Receive notifications about information and event scheduling for Wayne

We encourage you to share your most beloved memories of Wayne here, so that the family and other loved ones can always see it. You can upload cherished photographs, or share your favorite stories, and can even comment on those shared by others.

Posted May 04, 2020 at 01:05am
Dear Betty Lou, Kathy, Rosella and families,
We were so very sorry to hear of your father's passing. Please know we send our deepest sympathy and sincerest condolences. Losing one's parent is extremely hard, there will not be a day go by that you won't think of him and have some bit of news you would like to share with him. Cling to your memories, make faith in God your floor and do not be afraid to stand on it. "Grief is like the ocean, it comes on waves, ebbing and flowing. Sometimes the water is calm and sometimes it is overwhelming. All one can do is learn to swim. Grief is not a sign of weakness nor loss of faith, but rather it is the price of love."
Sending our deepest sympathy and love to each one of you,
Tommy and Karen lynch
Blake and Dr. Johannah D. Baugher
Trevor and Matalie Place
Comment Share
Share via: 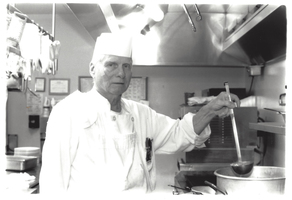 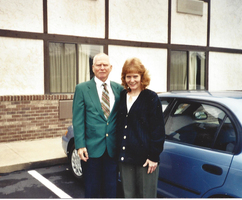 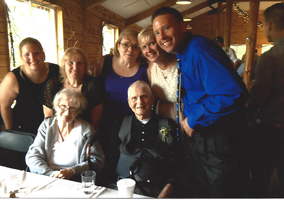