To share your memory on the wall of Edwin Dimberg, sign in using one of the following options:

Edwin and his late wife, Ruth resided in Hoffman Estates since 1959. They were charter members of Schaumburg Covenant Church on Meacham Rd.

He served in the Army during the Korean War and was stationed in Japan. He worked as a printer at W.F. Hall Printing until his retirement. After retirement he worked at School District 54 and was known as “Mister Ed”. He loved his family, his church and giving us his advice. He enjoyed fishing with his son, Charles. Jag älskar dig, samma Dad.

A memorial service celebrating his life will be held in the spring.

In lieu of flowers, donations made to Schaumburg Covenant Church of Schaumburg 301 N. Meacham Rd. Schaumburg, IL 60173 would be appreciated.

Receive notifications about information and event scheduling for Edwin

We encourage you to share your most beloved memories of Edwin here, so that the family and other loved ones can always see it. You can upload cherished photographs, or share your favorite stories, and can even comment on those shared by others. 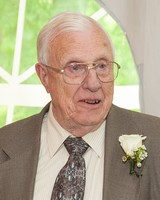