To share your memory on the wall of Myles Goddard, sign in using one of the following options:

Provide comfort for the family of Myles Goddard with a meaningful gesture of sympathy.

Myles was an adjunct faculty member at College of DuPage in Glen Ellyn and Triton College in River Grove. He was clan historian and bard at Clan Donald, USA Midwest Great Plaines Region and held 40 years at Holy Cross as department chairman for social studies. Myles was also vice president for education at Midwest Soarring.

Myles Donnelly Goddard devoted his life to teaching, and teaching was a part of everything he did, which included his profession as a teacher and his outside areas of interest. He taught Social Studies at Holy Cross High School in River Grove, IL, from 1963 until his retirement in June 2001. He served most of these years as Department Chairman, and over the years, had the privilege of teaching all the subjects in his department. He was extensively involved in extracurricular activities as moderator of the Chess Club, established the Catholic Action Layman’s Movement (CALM TUTORS) after school tutoring program, coached wrestling from 1965-1988, was proud that his wrestlers brought home the school’s ﬁrst athletic trophy with a coaching record of 138 wins, 8 losses, and 1 tie, and was moderator of the Archaeology Club. For the Archaeology Club, Myles organized field trips for 167 students over the course of 35 years, from 1965-2000, where he and his students collected and identiﬁed Native American artifacts, which covered 20,000 years of history, on family farms in the Senachwine Valley region in Central IL. His collection was extensive. Archaeology and anthropology were strong areas of interest, and Myles enjoyed sharing his knowledge of these subjects with persons of all ages. Myles was also an Adjunct Faculty Member at the College of DuPage from 1995-2005, and at Triton College in the late 1980s, where he developed and taught courses in the Native American Studies Program. Myles was invited to present programs and lectures for many colleges, universities, museums, community centers and organizations, and he received many awards for his services. Myles enjoyed performing and composing music and played the Native American flute and drum, Echo Harp, Irish Bodhrán and tin whistle. He was pleased that the hymn he composed in honor of St. Kateri, the ﬁrst Native American Saint, was published by the Chicago Archdiocese and is part of the religious services at the Kateri Center in Chicago. Genealogy and storytelling were other areas of great interest. Myles loved to tell stories to persons of all ages at annual Native American PowWows and the Illinois Highland Games. Myles was active in organizations of his Scottish heritage, Clan Donald USA, and his Native American heritage, Midwest Soarring, an organization established to protect the remains of indigenous people and sacred burial sites. Myles will be well missed by his many friends, former students and loved ones.

For information (630)289-7575 or www.countrysidefuneralhomes.com
Read Less

Receive notifications about information and event scheduling for Myles

We encourage you to share your most beloved memories of Myles here, so that the family and other loved ones can always see it. You can upload cherished photographs, or share your favorite stories, and can even comment on those shared by others.

Posted Jul 15, 2019 at 08:04pm
When I saw the obituary about Mr. Goddard, I was quickly transported back to the mid 60’s at Holy Cross High School, remembering one of the best teachers I ever knew. Over the years, I have often remembered Mr. Goddard and his warm, interesting and effective way of teaching. He made history come alive and it became one of my most enjoyable experiences in high school. I felt his sincere interest in the subject matter which made all the difference in making him a great teacher. May God bless him always. My sincerest sympathies to his family. Lon Batelli, Class of ‘68.
Comment Share
Share via:

Posted Jul 15, 2019 at 12:27pm
Although I never had the pleasure of meeting Mr. Goddard, I wish I did. I have always been interested in Archaeology, and...in fact...took an Anthropology course which I so enjoyed. Dave, I have to say that it seems you inherited your Dad's love of talking, and I mean that as a compliment.
My sympathy to you all.
Comment Share
Share via:

Posted Jul 14, 2019 at 03:37pm
I remember well Coach Goddard. He was an excellent social studies teacher and wrestling coach. As a former student I remember well his discussions of Vietnam and his cousin Terry who served in some capacity there. He inspired me to become a Political Science and American History major and subsequently an educator and administrator for 35 years. God bless and keep this gentle soul.

Posted Jul 14, 2019 at 12:22pm
I’m so sorry to hear of the passing of Mr. Goddard. I had him for Archaeology class my senior year at Holy Cross. I also joined the Archaeology Club that year. I remember going on a field trip to Southern Illinois to look for Native American artifacts. I also remember field trips to the Field Museum and to a Native American Pow Wow at Navy Pier. He was the best teacher I ever had.
Comment Share
Share via:
HS

Flowers were purchased for the family of Myles Goddard. Send Flowers 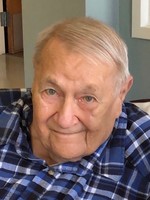