To share your memory on the wall of Robert Jones, sign in using one of the following options:

Print
Robert W. Jones, Jr., 81, of Streamwood; husband of the late Rosemary, nee Brennan; dad of Robert M., Daniel T. and Patrick T.; brother of the late Thomas A.; son of the late Robert W. , Sr. and Virginia, nee Curry; uncle and nephew of many.

Robert W. Jones, Jr., 81, of Streamwood; husband of the late Rosemary, nee Brennan; dad of Robert M., Daniel T. and Patrick T.; brother of the late Thomas A.; son of the late Robert W. , Sr. and Virginia, nee Curry; uncle and nephew of many.

He and his brother were raised on the South side ( Maywood and Melrose Park). They were Sox fans and Notre Dame fans. He was a 1956 graduate of Proviso East HS. He was a proud Army veteran. He was a valued employee for 40 years of First National Bank of Chicago. Mr. Jones was a hard working, honest, stubborn man who had a hard time passing up a good deal.

Visitation will be private at the Countryside Funeral Home and Crematory 1640 S. Greenmeadows Blvd. (at Barrington Rd.) Streamwood. Interment private at St. Michael.

In lieu of flowers donations to the Salvation Army would be appreciated.
Read Less

Receive notifications about information and event scheduling for Robert

We encourage you to share your most beloved memories of Robert here, so that the family and other loved ones can always see it. You can upload cherished photographs, or share your favorite stories, and can even comment on those shared by others.

Posted Nov 20, 2020 at 10:04am
Mr. Bob (as my 2 year called him) was the best neighbor we could have asked for, being first time home owners. He told us what he knew about our house, that we had raccoons living under our deck, and no matter what we would do they would always come back and he always greeted us with a smile and a wave. Our condolences to his sons and the rest of his family. He will be missed.
The Killham Family
Comment Share
Share via:
RJ

Thank you for your kind words. He often spoke about his “new” neighbors and had nice things to say. He was the last “pioneer” on the block! 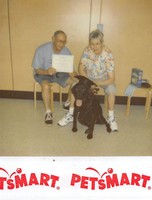